Oh Say Can You Three?

I got my wish Saturday and we took Stella to the zoo as our final family outing just the 3 of us.  We have an annual membership to our local zoo, so we go fairly often.  Still, we hadn’t gone for a normal Look at the Animals trip since Halloween.  We went during Xmas, when they do a holiday light display.  While it’s nice, it’s not the “zoo” as it’s dark and you’re there to look at lights.  You smell the animals but that’s about it.

We took it really easy.  Since it’s so mild right now, we didn’t have to try to go early to beat the heat.  This means Stella got to nap before we left and we all ate lunch at home vs. paying a mint to eat zoo nachos and hot dogs.  I love some junk food but that stuff is so salty it’s practically crystalline.  Not good for the Knocked Up and our cankles.  The kid had a ball.  I almost got sad realizing how much she has missed not seeing other little people lately.  She spent the first 20 minutes or so just running after any other child she saw, whether they were 9 months or 9 years old.  At one point she threw herself into a wagon containing 2 other little girls being pulled by another mom.  It’s a really, really good thing she’s going to school later this year.  I think she needs the contact.

Anyway, it’s always amazing to me as a parent to see how much and quickly these spongy little brains absorb.  Just a year ago, Stella would just look at birds and occasionally say “guck.”  Now, she’s chattering about elephants, giraffes, snakes…  I think her favorites this trip were some blue parrots that were super pissed off about something and screaming non-stop.  She also really liked the fish.  I may have to get a small little aquarium set-up for goldfish.  I can’t believe I’m saying that as we prepare to bring a new baby home.  I’ll think on that for a while first.

What you can’t see in this pic is how wet she is. Her father neglected to watch out for water hazards and she promptly drenched herself in a fountain before we saw the first animal.  The wet neck he got here serves him right! 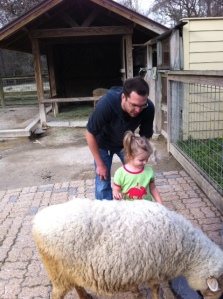 Petting zoo stuff. She was singing “ee-ii-ee-uh-oh” for most of it. 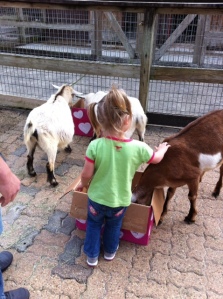 Hard not to be a helicopter mom during this bit as I remembered that goats eat EVERYTHING from aluminum cans to rose bushes to children’s fingers.

We spent a good amount of time at the zoo’s fantastic playground before we left.  In all seriousness, if I were to win some Monster Home Makeover prize, one of the top 2 things I’d request would be to recreate this playground in my backyard.   It’s still hard not to hover as my 2 year old climbs 6’ ladders with 10 year olds and shoves them out of the way so she can go down the scary tube slide headfirst.  She was the only child in diapers on that thing.  They do have a little toddler area but my kid graduated from that a year ago.  I know as parents we all Ooh and Aah about the amazing talents of our spawn, but my little girl’s physical skills are something.  She’s big and tough. She’s like a hockey enforcer, I swear.  At one point she face-planted on the rubber mulch and got up immediately with the whole side of her face scratched and inflamed.  She shook it off and went straight back to jumping.  I saw much bigger and older kids being carted off crying for less while we were there.

The toddler slide is for losers!

It was just a good day.  I’m glad.  And while poor Will had to do all child-wrangling while I slowly waddled along, I still overdid it somehow.  By the time we got home I physically felt so rotten I could barely move. BY was also either quite amused or un-amused.  I guess the 2.5 hours of walking around rocked him good and asleep because when he woke up I officially changed the name of my uterus to the Lair of the White Worm.  He was so violent I almost felt nauseous.  I still felt crummy yesterday.  I am proud to report, however, that the hospital bag is largely packed.  The only things not in there are a couple of gifts for Stella “from BY” that I just haven’t wrapped yet1 as well as that last-minute stuff you just can’t pack early.  While I’m pretty much too corpulent to go out in public anymore2, I still have to have some standards like teeth-brushing. 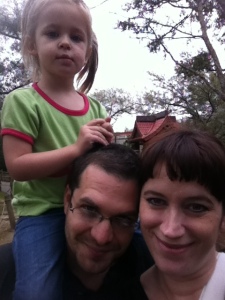 Next zoo pic will contain BY. See you on the other side!

1 I’m still hoping some good old-fashioned bribery will keep Stella from disliking BY too much at first.

2 I can no longer wear any separates without either my stomach or the panels in my loathsome maternity pants showing as my gut is too big to be covered by standard maternity shirts.  I feel like I ought to join Honey Boo Boo’s family.

Working mom. Is there any other kind? Geologist. Nerd.
View all posts by larva225 →
This entry was posted in Parenting, pregnancy and tagged cankles, family outing, motherhood, physical skills, zoo. Bookmark the permalink.

1 Response to Oh Say Can You Three?

This site uses Akismet to reduce spam. Learn how your comment data is processed.