Felix did not “pass” his test to get back into the magnet school.  Just like last year, I’m devastated for him and for all of us.  I really thought we had it this time.  He’s done so well – straight “outstandings” in school.  He’s settled down in class.  Behavior charts all show green.  We’ve been working first grade exercises – and even some second grade – on this computer program that the school likes to use.  He has worked so very hard.  But he’s not good enough, according to some random bullshit test.  What was craziest of all was that it was his math score that did him in.  I even called to make sure there wasn’t some error.  He has a math/science brain.  There had to be some malfunction.  Nope.

I’m so fucking angry about this.  My freshly-turned 6 year old boy is brilliant.  I don’t care what some test says.  Oh, and let’s not forget that with ADHD, kids often don’t “test well.”  It’s fabulous that this is the only criteria with which we choose to measure and place them.  I’ve never seen another 6 year old carry a ziploc bag of rhizomes to school to illustrate that seeds are not the only way plants can reproduce.  He’s the only one I know that can name most of the major index fossils of the Paleozoic.  This morning he was looking at his periodic table blanket and wanted to watch a YouTube video about it.  He had breakfast with Mendeleev.  He’s 6.  And he’s not “smart enough” to be a magnet kid. 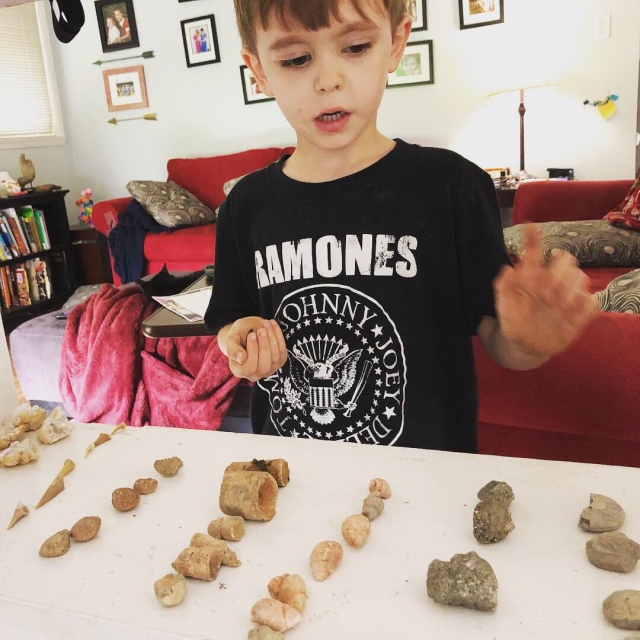 He created a miniature museum and organized his collection with proper labels. He’s clearly a dummy.

Our education system is seriously fucked up.  This is wrong on so very many levels.  And I know my son is not the only one out there by far.  Who knows how many brilliant kids are being cast aside because the powers that be choose to look at such a narrow sliver of a kid’s potential performance – and all this despite a mountain of evidence to the contrary regarding different types of intelligence.

So I’m sad.  I’m pissed off.  I want to cry, scream, punch someone in the fucking throat.  And I’m tired.  It feels like everything is a fight.

So I’m trying to pull up my big girl panties yet again and rally for another year – another year of 2 schools with the same schedule, 2 sets of teachers and support staff, 2 sets of school fundraisers, colliding programs and assemblies, another magnet application in the fall, waiting on another letter telling us if he even gets a shot at taking the test, another test, another wait on results.  And if that goes poorly – as it has twice now – another day sitting stunned at my desk trying not to cry like a wuss at work, frantically Googling charter and private schools just to see if maybe something new and workable is out there.

The above paragraph is rather petty.  That’s all about me.  The worst thing is him.  How do I tell him he didn’t work hard enough when he really did – for months.  He now knows that Stella’s school is better than where he is.  They get cool perks – travelling farms, StarLab.  They get field trips.  He gets the bare bones.  While I was in the magnet office waiting for him to finish testing, they got a phone call: the local STEM magnet high school was inviting the kindergarten classes to come tour their robotics lab.  Felix belongs there.

I also worry about the kids he’s with now.  These are kids who aren’t necessarily raised the way he has been.  They’ve been exposed to things I don’t think children should be exposed to.  They’re rougher.  There are fights in the older grade levels.  I guess it’s a really good thing he’s in jiu jitsu.  It may actually pay off in a real world setting.  I’m scared for him.  He is a sweet little boy.

Working mom. Is there any other kind? Geologist. Nerd.
View all posts by larva225 →
This entry was posted in life, Parenting and tagged ADHD, intelligence, magnet program, school. Bookmark the permalink.

This site uses Akismet to reduce spam. Learn how your comment data is processed.